David B. Carlson, age 84, of Willmar, formerly of Appleton, passed away Thursday, September 1, 2022, in Carris Health Care Center in Willmar. A visitation will be held 5-7 p.m., Wednesday, September 7, 2022, at Zniewski Funeral Home-Vaala Chapel in Appleton. A private, family burial will be held in Appleton City Cemetery. No formal services are planned. In lieu of flowers, memorials may be made to: Hawk Creek Animal Shelter, Willmar; Appleton Arts and Culture Center, Appleton, MN; the Martinson Foundation in Appleton, MN or a charity of one’s choice.

Before David could even walk he crawled out of the house, down the block, across the street (State Hwy 7 in Appleton, MN) and was partway down the next block when he was discovered and returned to his mother. He was the fourth of five active children.

David’s parents owned Carlson Hardware store in Appleton, MN. David figured out how to fix things at an early age and built a scooter for himself out of recycled parts. He tells of frequently driving Elmer Benson, the former governor, as he drove Elmer’s huge Packard limo while sitting on pillows and looking through the steering wheel. The reader can try to guess David’s age. David’s father began farming and David along with brother Orion helped with production. David played clarinet in the HS band and graduated from Appleton High School.

He attended Luther College for a year and then purchased a farm south of Appleton at the age of 21. He raised crops and attended the University of Minnesota where he obtained an associate degree. He served 6 years in the National Guard and worked winters at Lutsen Resort where he ran the big equipment and headed the ski patrol. After marrying Nancy, a new teacher in the Appleton School District, he began farming full time and started feeding cattle. Together they raised two sons.

David was a charter member of the Appleton Lions and the Appleton Flying Club. He assisted with Cub Scouts, 4-H projects and served on the Appleton Refugee Committee. During the farm crisis he was active with the American Ag Movement.

When Nancy’s employment moved her around the state the family joined her. They moved first to rural Milan, then Battle Lake and to Morris. During their Morris years David still farmed, joined the Morris Flying Club and attended SWSU in Marshall where he received his bachelor’s degree. When they moved to Stillwater he commuted from the farm and auditioned and sang with the Valley Chamber Choral. When Nancy found employment in Willmar they lived first at the farm and then settled in Willmar. David retired from farming.

David enjoyed downhill skiing, biking, men’s Bible study and chai tea with his guy friends at Lulu Beans. He was blessed with a dry sense of humor, the skill to fix almost everything, a love of gadgets and endless patience. He will be greatly missed by family and friends.

David is survived by Nancy, his wife of 56 years; his sons Eric Carlson of Appleton and Scott Carlson (and Judy) of White Bear Lake Township and his sister, Leatrice Benson of Morris. He was preceded in death by his parents, Elmer and Luella Carlson; brothers Orion and Elmer Jr. and sister Marjorie Knutson. Please sign the guestbook at www.zniewskifuneralhome.com 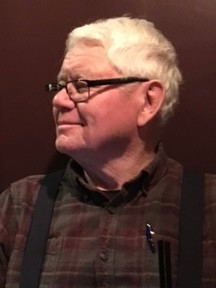