Katherine Hirman, 67, of Chaska, died Wednesday, April 20, 2022 at Ridgeview Hospital in Waconia. Her Mass of Christian Burial will be 11:00 am, Saturday, May 7th at St. Clara Catholic Church in Clara City. Interment will be in Sacred Heart Catholic Church, rural Raymond. Visitation will be one hour prior to the mass at the church. www.hafh.org

Katherine was born December 11, 1954, in Willmar, Minnesota, the daughter of Clarence and Edna (Folkerts) Hirman. She grew up in Raymond, was baptized and confirmed at Sacred Heart Catholic Church in Raymond and graduated from Raymond High School in 1972. Following high school, she moved to Willmar.

On September 15, 1979, she was united in marriage to Tom Ahrenholz at St. Clara’s Catholic Church. They moved to the cities, living in Savage and Chaska. To this union a daughter, McKenzie was born. She worked a variety of jobs while living in the cities but will be remembered by many who frequented Perkins in Chaska where she waitressed for many years.

Her family recalls her Converse tennis shoe collection, her love of purple and Jackson Browne. Even though she struggled at times in her life, Katherine was proud of her 12year Sobriety Medallion. She was often an inspiration to others helping them with their own sobriety.

She was preceded in death by her parents, brothers Gene, John, Lloyd and Dennis: and a sister, Gloria, in infancy. 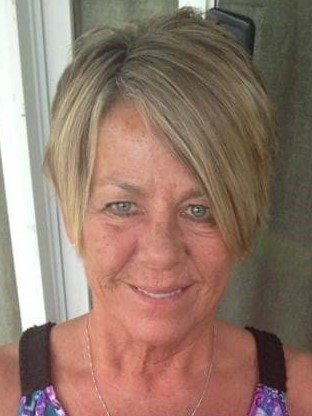